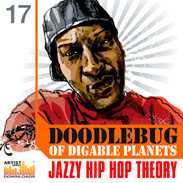 Time to checkout some more samples, for those that like to mix the live jazzy sound with hip hop and downtempo funk.

Some of the new school folks may not know who Digable Planets are…let’s just say, they ARE jazzy hip hop!

Doodlebug is a member from this very group.

So let’s check this joint out!

So what is Doodlebug’s Jazzy Hip Hop Theory?

It’s that real jazzy hip hop, played by the very same live musicians that have been playing with Doodlebug throughout his career from Digable Planets to his own solo stuff.

If you got a real appetite for that classic, jazz influenced hip hop, boom bap, back pack, funk-rap sound…then this may be your thing.

You get real live drum loops, electric and upright bass, as well as some saxy flute lovin.