Check out part eight of THE SMILE RAYS video tour blog from Berlin. They are turning Europe upside down..
Posted by EDAYE at 12:47 PM No comments:
Labels: the smile rays, video

One of our friends and strongest supporters, Trina Slade-Burks presents a new COLLABORATION Exhibit in West Palm Beach Florida. This exhibit features the work of Anthony Burks, Lucy Keshavarz and Mark Gierok. Come out and support if you are in the West Palm Beach area. You can contact Trina at the above email link or call 561.842.5724 for more info.
Posted by EDAYE at 12:45 PM No comments: 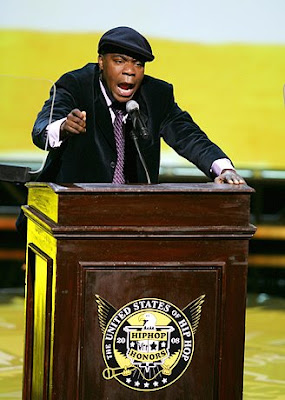 This year's VH1 HIP HOP HONORS celebrates the contributions and the impact of Cypress Hill, Naughty By Nature, Too Short, De La Soul and Slick Rick. Once again hosted by actor/comedian Tracy Morgan, this year looks to be even bigger than the last. I will definitely be tuning in and will post my thoughts. Seeing Naughty By Nature perform at Ralph McDaniels' Video Music Box 25th Anniversary concert, I look forward to the stage being destroyed by one of the best groups in hip hop EVER. Check out the video below for rehearsal footage of Ghostface Killah and Biz Markie practicing their Slick Rick tribute: 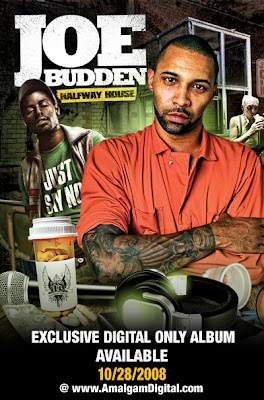 AMALGAM DIGITAL prepares to drop a digital only release from Joe Budden titled "HALFWAY HOUSE". This is the first of two new Joe Budden projects being released by Amalgam Digital. The second being "PADDED ROOM" in February of 2009. Check Amalgam's site for more info and stay tuned to THE ZRO HOUR for material from Joe's upcoming full length CDs.
Posted by EDAYE at 6:59 PM No comments:
Labels: amalgam digital, joe budden 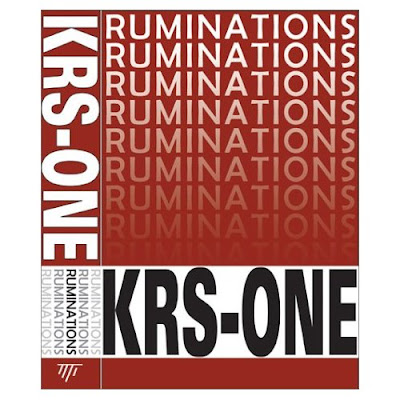 I'm an idiot for not picking up this book in the many times that I had an opportunity. KRS One's second book (the first being "The Science Of RAP") titled "RUMINATIONS" is apparently VERY sought after. Its out of print (originally published in 2003 and commanding up to $2300 on amazon.com. "Ruminations" featured a foreword by journalist Tavist Smiley and expands KRS' discourse on life, living as an American citizen as a man of African descent, Hip Hop culture, spirituality and his overall world view. I am a great supporter of KRS' music and views on Hip Hop culture. I am always on the lookout for books that expand my library of Hip Hop history and commentary. If anyone knows wher I can find a used or new book for no more than $40 let me know..
Posted by EDAYE at 6:07 PM 3 comments:
Labels: books, krs one 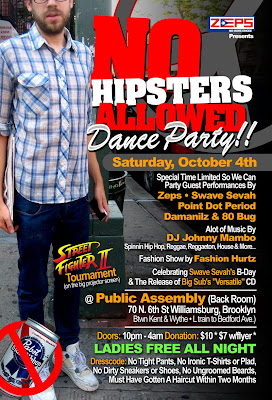 ZEPS of Brooklyn based crew, Point Dot Period (and the emcee on our ZRO HOUR THEME 08), presents a dance party featuring himself, Point Dot Period, Swave Sevah, Damanilz and 80 Bug on stage with DJ Johnny Mambo on the 1s and 2s. The NO HIPSTERS Dance Party and Street Fighter tournament will be held at Public Assembly (70 N. 6th Street between Kent and Wythe streets in Williamsburg, Brooklyn) The door is $10 all night. Hit up ZEPS for more info.
Posted by EDAYE at 4:53 PM 2 comments:
Labels: point dot period, zeps 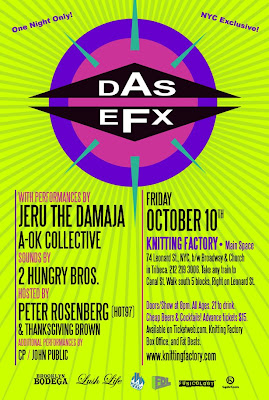 Come out to support one of the best hip hop duos of the golden era- DAS EFX! Next Friday, October 10th, Das Efx along with opener Jeru The Damaja bring the diggity dope flows to NYC's Knitting Factory. Additional performances by A-OK Collective, CP and John Public. Advance tickets are $15. You can purchase tickets at The Knitting Factory box office, Fat Beats and Ticketweb.com.

After previously posting links and video (HERE and HERE) from Wayne Barrow's production blog for the upcoming Biggie bio pic, NOTORIOUS, the trailer finally drops. Actually, I first saw it in the theaters this past weekend before a screening of Spike Lee's latest film MIRACLE AT ST. ANNA. It looks great so far and the look of the era is captured well. Chills..
Posted by EDAYE at 1:07 PM No comments:
Labels: notorious b.i.g., video
Newer Posts Older Posts Home
Subscribe to: Posts (Atom)