In case you missed it tonight the podcast is up!

THEZROHOUR returns to the airwaves this week with the best in independent and underground hip hop. In this week's Producer's Corner we drop some heat from French beatmaker ONRA and our Spotlight Artist of the week is the super crew INFINITY GAUNTLET (Bekay, Red Eye, F.T., Shabaam Shadeeq & El Gant)!

Posted by EDAYE at 1:00 AM No comments:
Labels: bbox radio, podcast

Whooo! Love that street hop as Sean Price and Termanology bring bars of fury over crisp beat by the one and only Statik Selektah.
Posted by EDAYE at 12:02 PM No comments:
Labels: sean price, statik selektah, termanology, video

Posted by EDAYE at 11:54 AM No comments:
Labels: the kid daytona, video

I am loving this video concept filled with images of hand drawn scenes by visual artist and producer dsteele.
Posted by EDAYE at 11:51 AM No comments:
Labels: common, video 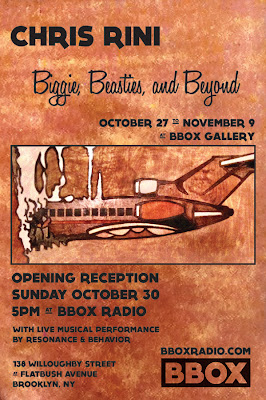 Please join us on October 30th for the opening of Christopher Rini's show 'Biggie, Beasties, and Beyond.'

When BBOX Radio approached Chris Rini about putting this evening together, the initial intent was to create laudatory works, based on a shared history in music and borough. After picking two iconic images, it became apparent that there was a sad, prophetic vein in each of them. They're more somber than their predecessors, no doubt because even the artists themselves are no longer young. The Beastie Boys are now elder statesmen of a genre and this reckless, casual violence would normally be written off as the folly of youth. In a perverse, life imitates art moment, their 80's dystopia full of cash and cocaine is more reminiscent of current events. The color palette was chosen as an allusion to old sepia photography, and implies that this is "ancient" history, doubtless to be forgotten and repeated.

"Ready" is even more stark in that it's original intent has come full circle. This album signifies the shift in a genre's themes & production style from the 80's to the 90's. It is also the breakout album of one of the greatest hip hop artists. That it should loom so large in his catalog is a sad reality. This piece is meant to be more of a tombstone than album cover. Juxtaposing the iconic baby with Wallace's dates of birth and death let the viewer ruminate on both their own memories along with B.I.G.'s legacy.

Christopher Rini is a contemporary artist living and working in NYC. He works primarily in wood stain, using figurative, iconographic and architectural imagery to explore the way inanimate objects and moments in time gain significance in our lives. Memory is seen as a defining piece of our experiences and identities, yet something that can never perfectly be shared. His next show will be an installation piece at the Art Bar in Manhattan this coming December.

Christopher Rini was born in Queens, NY and received his BFA, Fine Arts, from Hunter in 2001. He also received three full fellowship grants to the Vermont Studio Center from 1999 to 2001. He has produced work both for private collectors and for use in commercial spaces.