VIDEO: THE ROOTS "Get Busy"


2nd hot new video featuring Dice Raw and Peedi Peedi from The Roots upcoming new release, RISING DOWN. Check out the 1st one for the song "75 Bars (Black's Reconstruction)" HERE

Peace to thetastecrew.com for the heads up!
Posted by EDAYE at 12:38 PM No comments:
Labels: the roots, video 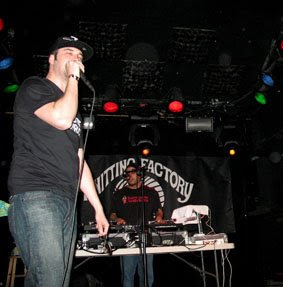 Emcee and producer IAMISEE tore down The Knitting Factory in NYC at the afterparty for the premiere of PLANET B-BOY on March 21st. We played an IAMISEE track, "Generation 1", last year on THE ZRO HOUR. His manager Sister7 contacted me about one of his songs getting placed in the film invited me to come see him perform. 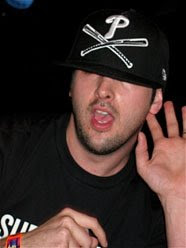 IAMISEE reps Philly and his rhymes and stage show were tops. Backed by DJ DP-1, IAMISEE proceeded to rock for over an hour(!) and never lost the crowd. I heard some of the best hip hop in a long time that night and hung on every word. When I see artists live, I examine their stage techniques and confidence on the mic. I look for clear delivery and the ability to switch it up on demand. IAMISEE had all the main ingredients to rock a party. 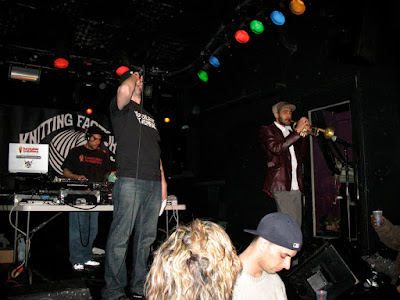 Not to be outdone, DJ DP-1 of the TURNTABLE ANIHILISTS, showcased his incredible scratching skill throughout. He was given a solo showcase but did not wait till then to reveal the skill set. He dropped fluid scratches over every track and with the combination of IAMISEE emcee skills, we were treated to a classic two man hip hop performance. The b-boys in the house lost their mind and we were reminded what the "true school" is all about.
Posted by EDAYE at 5:49 PM No comments:
Labels: dp-1, iamisee 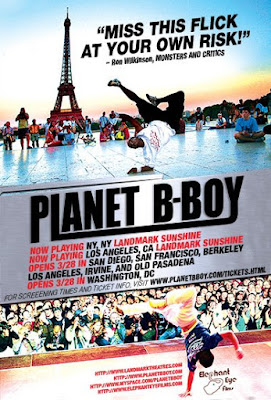 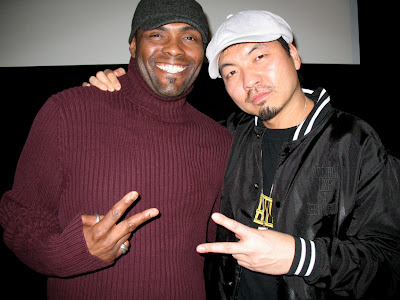 A bit late posting this but never too late to spread the word on one of the greatest hip hop movies ever- PLANET B-BOY. I can confidently say that (as shown by my cheesy smile above) it's one of the greatest due to the focus on a very under appreciated facet of hip hop as well as the expressed love for hip hop culture as spoken by the film's phenomenal dancers. PLANET B-BOY is a documentary that follows five teams of b-boys as they prepare for the event of their lives. The "Battle of the Year" b-boy championship is held annually in Germany and its competitors are culled from international semi-finalists that represent their country of origin. The film follows two teams from South Korea (Last For One and reigning champions Gamblerz), one from Japan (Ichigeki), France (Phase-T) and the United States (Knucklehead Zoo) respectively. 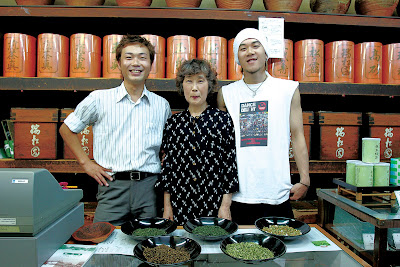 pictured above: B-boy Katsu from the Japanese team “Ichigeki” with his mother and brother at their family tea shop in Osaka. Photo Credit: Benson Lee. Elephant Eye Films

Throughout PLANET B-BOY we see each team in their native environment and gain insight into how the love for hip hop culture both binds them and drives them to self expression. As I was watching I felt proud to see how other cultures have embraced something uniquely American as hip hop and how it has evolved into an all-inclusive way of life for youth around the world. We see the same misunderstanding and minimal support from some parents as they struggle to identify with their children. We also see them come around when they see how participating in hip hop has enriched the lives of their children. 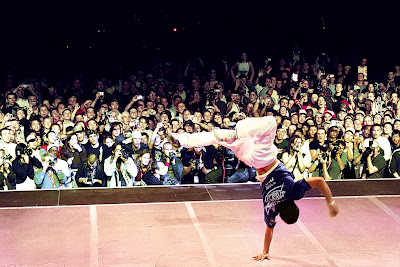 The dancing is outstanding and you will stare in awe as these b-boys craft some of the most innovative, daring and seemingly physically impossible moves. The film is in limited release so catch it when it hits your city. SUPPORT it by all means. With all the dance shows currently on television, we are seeing a resurgence in the art of street dancing. PLANET B-BOY is a must see for all who love hip hop and for those who forget that the culture is more than emcees and DJs.
Posted by EDAYE at 4:54 PM No comments:
Labels: iamisee, movies, planet b-boy
Newer Posts Older Posts Home
Subscribe to: Posts (Atom)