MIXTAPES: THE PROBLEMADDICTS: "Burn This SHIT" Mixed By DJ THEORY 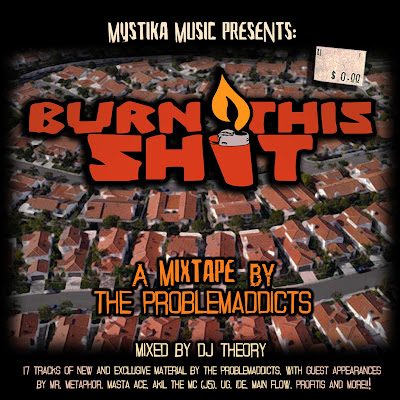 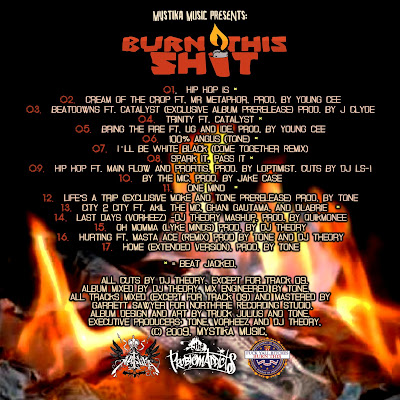 DOWNLOAD HERE
Posted by EDAYE at 12:15 AM No comments:
Labels: mixtapes, the problemaddicts 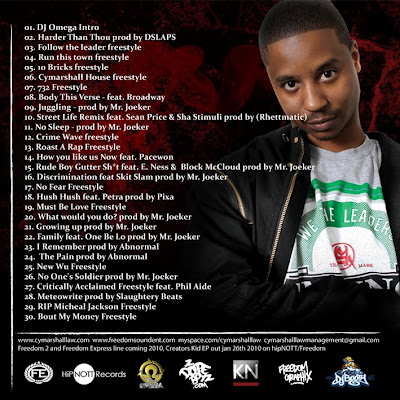 Cymarshall Law‘s Creator’s Craft Mix CD is a mix of unreleased and new songs and freestyles, which were recorded or released in 2009.

The Revival (Europe, 2009, 17 min).
Directed by Invincible.
Produced by EMERGENCE Media and Iqaa the Olivetone.

The Revival gives a candid glimpse into the first meeting of legendary Hip-Hop pioneer Roxanne Shante and veteran Philly emcee Bahamadia, as they trade stories of their struggles and triumphs in the industry over their long careers. It shows the exchange of lessons between them and up-and-coming artists DJ Shortee, Eternia, Stacy Epps, and Invincible. This short documentary, a collage of performances and behind the scenes footage, was filmed by Invincible while on the road in Europe as part of We-B Girlz all women independent Hip-Hop tour. The largest all female Hip-Hop tour of its kind, it spanned over three weeks, six countries, and featured dozens of female artists who performed for tens of thousands of supporters.

Co-presented by TheFembassy.com which features follow-up interviews with the artists from the film.
Posted by EDAYE at 12:02 AM No comments:

Producer Just Blaze reminisces about his history at Baseline Studios (which he now owns). I am dying to know which rapper f*cked everybody up and created a bloody mess??
Posted by EDAYE at 11:55 PM No comments:
Labels: just blaze, video

Interesting report from CNN about a bi-racial, Chinese woman who recently competed on a chinese version of an "Singing Idol" competition. Public comments stemming from her appearance became nasty and insensitive. Although Lou Jing was subjected to racist criticism, she still enjoyed a great deal of support from the viewing audience.

Thanks to ILLSEED from ALLHIPHOP for the original post.
Posted by EDAYE at 11:57 AM No comments:
Labels: video

ONYX returns with venom and a few darts at Dame Dash in this new video from their upcoming "Black Rock" project. Dame Dash has released his own "Black Roc" album with The Black Keys and various emcees. Sticky and Fredo are still bringing that official ish! Check out the Jay-Z impersonator going back and forth with Sticky Fingaz in the beginning of the track.
Posted by EDAYE at 12:10 AM No comments:
Labels: onyx, video
Newer Posts Older Posts Home
Subscribe to: Posts (Atom)