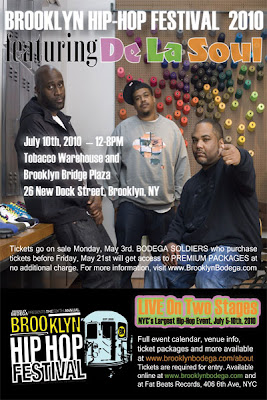 PLEASE NOTE: Those Bodega Soldiers who purchase their tickets by May 21st will get access to premium packages at no additional charge. Anticipated perks include being on a priority mailing list that receives all Festival announcements prior to the general public, admittance to a reserved section next to the stage, ability to enter exclusive raffles, priority check-in at the Main Day venue and a FREE commemorative souvenir. Bodega Soldiers will also automatically be entered to win backstage VIP packages.
Posted by EDAYE at 11:52 AM No comments:
Labels: brooklyn bodega, brooklyn hip hop festival, de la soul

KALAE ALL DAY releases her debut video "O.G.LYRIKALBOOKBAGGER" featuring underground favorite Homeboy Sandman. Check out the behind the scenes vid below:

Posted by EDAYE at 11:42 AM No comments:
Labels: Homeboy Sandman, Kalae All Day, video

I am definitely ready for the 2010 Lupe! Dope video. I first premiered this track on S06E14 of THEZROHOUR podcast.
Posted by EDAYE at 6:00 PM No comments:
Labels: lupe fiasco, video

Props to my dude Saint Joe over at soundsandgear.com. Saint Joe did a great review of this impressive must have manual for both new and veteran beatmakers. "The BeatTips Manual" by Amir SA'ID. Check his review below and read more HERE