New York Times: The Shrinking Market Is Changing the Face of Hip-Hop

I overlooked this article in the December 30th edition of The New York Times. Times writer, Kelefah Sanneh, wrote a thorough piece observing the shift in Hip Hop music as well as noting some of the best, most slept on releases this past year. You can check the article Here. In the meantime, here is an excerpt:

"UNTIL a few weeks ago it seemed like one of the few happy stories to emerge from an otherwise difficult year in hip-hop. UGK, the Port Arthur, Tex., duo that influenced a generation of Southern rappers, returned after a five-year hiatus. They came back bearing a sublime single, “Int’l Players Anthem (I Choose You).” And they came back bearing a great double album, “Underground Kingz” (Jive/Zomba), which made its debut atop Billboard’s album chart. hen, on Dec. 4, the news arrived: Pimp C — the duo’s flamboyant half, a slick drawler and an even slicker producer — had been found dead in his hotel room. His bereaved musical partner, Bun B, gave a handful of eloquent interviews, trying to explain what he had lost, what fans had lost.

“I appreciate the concern,” he told Vibe. “But I wouldn’t ask anyone to stop their life, because Pimp would’ve wanted us all to keep grinding.”

If you’re looking for a two-word motto for hip-hop in 2007, you could do worse than that: “Keep grinding.” This was the year when the gleaming hip-hop machine — the one that minted a long string of big-name stars, from Snoop Dogg to OutKast — finally broke down, leaving rappers no alternative but to work harder, and for fewer rewards. Newcomers arrived with big singles and bigger hopes, only to fall off the charts after selling a few hundred thousand copies, if that. Hip-pop hybrids dominated the radio, but rappers themselves seemed like underground figures, for the first time in nearly two decades.

Sales are down all over, but hip-hop has been hit particularly hard. Rap sales fell 21 percent from 2005 to 2006, and that trend seems to be continuing. It’s the inevitable aftermath, perhaps, of the genre’s vertiginous rise in the 1990s, during which a series of breakout stars — Dr. Dre, Snoop Dogg, Tupac Shakur, the Notorious B.I.G. — figured out that they could sell millions without shaving off their rough edges. By 1997 the ubiquity of Puff Daddy helped cement hip-hop’s new image: the rapper as tycoon. Like all pop-music trends, like all economic booms, this one couldn’t last..."
Posted by EDAYE at 8:52 PM 2 comments: 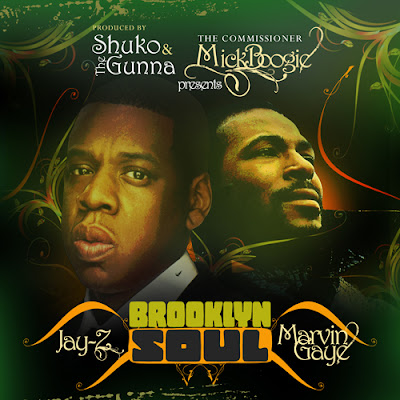 Props to FOUNDATION MEDIA for sending me this-

Keeping his string of hits going, Foundation Media's Shuko linked up with The Gunna and Mick Boogie for Brooklyn Soul - a Jay-Z remix album using only Marvin Gaye samples and elements. Perhaps the most talked about of all the recent Jay-Z remixes, this album takes a great album and makes it classic. To download the album go to www.jayandmarvin.com, where you can also check out the remix version of the "Blue Magic" Video. Download "Brooklyn Soul" now and spread the word!

Hailing from Mainz, Germany (near Frankfurt), Shuko is one of Europe's top hip hop producers. Shuko's production credits range from major label to indy and include work with Keith Murray, Jedi Mind Tricks, Saigon, Immortal Technique, Bubba Sparxxx and more. '08 is going to be an exciting year as there are many placements yet to be announced. To purchase Shuko beats, or for more information, contact Foundation Media at info@foundation-media.com.
Posted by EDAYE at 10:43 PM No comments:
Labels: jay-z, mick boogie, mixtapes
Newer Posts Older Posts Home
Subscribe to: Posts (Atom)