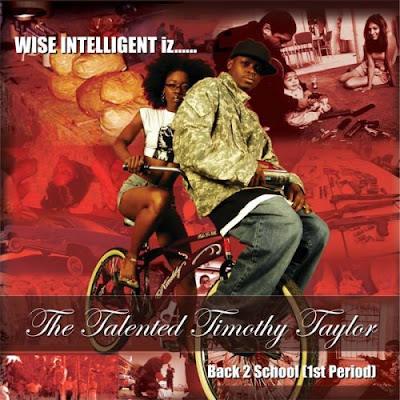 This week WISE INTELLIGENT has released another blast for the true heads, Wise Intelligent iz..The Talented Timothy Taylor. I am ordering a copy (yes, I still buy SOME CDs) so that I can throw some support behind one of the best lyricists in Hip Hop. I also want to play some joints on the show so look for that soon. Check out Wise's myspace for a few samples from this project. "I'm Him" and "Genocide" showcases Wise Intelligent's ability to balance wisdom and entertainment. COP THIS!
Posted by EDAYE at 11:12 AM No comments:

This article found on ALLHIPHOP is a follow up to an earlier post on the gentrification of the Bronx neighborhoods where Hip Hop was born:

1520 Sedgwick Avenue, long considered an important site in the creation
of Hip-Hop, is officially eligible to be recognized as landmark by the
State of New York.

Organizers will hold a a press conference on Monday (July 23) announcing
that the New York State Office of Parks Recreation and Historic
Preservation approved an application on July 2 to make the location
eligible to be considered a historic landmark.

The office stated that 1520 Sedgwick Avenue "meets the eligibility
criteria being that it is associated with events that have made a
significant contribution to the broad patterns of our history."

As a result, 1520 Sedgwick Avenue will be eligible to be designated as a
national historic landmark by the State and National Register of
Historic Places.

The press conference is scheduled to take place at 9:30 a.m. in front of
1520 Sedgwick in the South Bronx.

In addition to celebrating 1520 Sedgwick Avenue, the event will
recognize rap pioneer, DJ Kool Herc, who was recently labeled "the
innovator of Hip-Hop" by Time Magazine.

Despite the triumph of the honoring, 1520 Sedgwick Avenue is in danger
of being bought out of its affordability program by its owners, BSR
Management.

According to organizers of the press conference, BSR plans on selling
the famous building to a private-equity investor.

1520 Sedgwick, a Mitchell-Lama development is home to hundreds of
low-income residents.

Tenants of the building were notified that BSR
plans to buy-out in February 2008.
Posted by EDAYE at 5:01 PM No comments:

What's good? Back in Brooklyn and still unpacking is what's good with me. Alexie F. had a phenomenal trip to Miami and made some great connections in the world of Reggaeton/Latin Reggae/Hip Hop. Alexie was able to secure interviews with "La Originale Chica del Reggae"- SANDY, LA LOBA and MEXICANO 777. More from that trip soon. We are lining up some great interviews for early August and should have some info on the T-shirt requests that have flooded in shortly. R.I.P. to KRS One's son who recently passed. Shout out to Underground EXP and their Prince Paul tribute tonight @ GALAPAGOS ART SPACE. I am going to have to miss this one unfortunately. What up Remy Ma??!! Hope all goes well with that shooting incident. Innocent until proven guilty, right?

I received this video from DJ JS-1. DJ JS-1 was featured on Regis and Kelly's morning show showcasing an underappreciated element of hip hop-SCRATCHING. This type of performance does not receive mainstream exposure often so it was good to just see a DJ featured solely doin' his craft. It was broadcast on July 6th 2007. Check for Kelly spittin' over MIMS' "This is Why I'm Hot" while Regis is doing the zigga zigga..