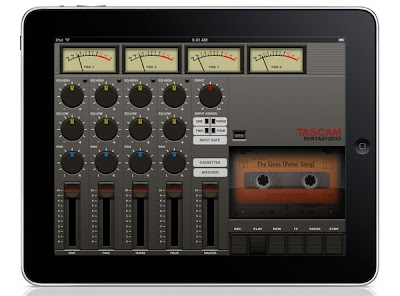 Tascam's Portastudios laid the foundation for affordable multi-tracking for novice and professional musicians alike. Before digital audio workstations such as Pro Tools became the norm and affordable by average consumers, a four or eight track cassette-based Portastudio was a breakthrough product. Musicians were able to produce quality demos and in some cases entire albums on this analog device.

Flash forward to 2010 and the increasing footprint of Apple's iPad has signaled a return to nostalgic hardware wrapped in a software interface. The $10 Tascam Portastudio app has the classic interface and simplicity of the hardware recorders.

* Cassette tape-style transport. (Linear transport, I might add. Seriously. You have to rewind and fast forward to get around.)
* Routing to four inputs.
* Mixdown to stereo (via a dialog box, so that’s the point where you break the illusion).
* Simple EQ.
* File sharing, via iTunes or Soundcloud. (This last item is what makes this a useful tool and not just a novelty.)
* Support for “a few” class-compliant audio interfaces, though your mileage may vary.

Unfortunately the "bouncing" feature is missing but updates could fix that. Get more info HERE

Thanks to ENGADGET for the original post.
Posted by EDAYE at 1:33 PM No comments:
Labels: ipad, music tech, tascam portastudio

Insane lyrical content. Shout out to The Audible Doctor (Brown Bag All Stars) on production.
Posted by EDAYE at 12:26 PM No comments:
Labels: joell ortiz, the audible doctor, video

Wow. Can't front this is kind of dope. Kind of. I love the ability to utilize the touch screen of the iPad to sub for the vinyl control records for DJ software such as Serato and Traktor Pro. Does it make a lot of sense? I think I would rather have turntables or some other type of hardware controller as opposed to buying two iPads. Get more info about Tonetable HERE
Posted by EDAYE at 11:55 PM No comments:
Labels: apps, ipad, music tech, tonetable
Newer Posts Older Posts Home
Subscribe to: Posts (Atom)