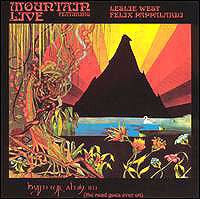 Yes you read that right, Rock N' Roll is a part of the roots of Hip Hop music. Where do you think some of the hardest drum sounds come from? We have a new show this week focusing on some of the most influential rock songs in the history of the music who just happen to feature crazy breaks that DJs and producers have revered for decades. We also play a few that could be the future of sampling and feature rare and classic songs from Mountain, Onyx & Biohazard, Ice T's Body Count, Led Zepplin and the Geto Boys. Check out the exclusives section for new joints by THIRD KIND ft. PRODIGAL SUNN and ANKH ft.SHAREEF. Shareef brings that heat straight outta the Netherlands and to your chest. I got another hot joint from Reef but i'm gonna save it for the next show- Unsigned, Independent, Slept On talent from some of the realest hip hop found on Myspace and my.Rawkus.com. Until then, Enjoy the show..

In this clip, Buckshot speaks on how to approach the art of producing and staying original with your music-

This year's Remix Hotel NYC was great with a huge turnout and a good panel discussions about the art and business of production. The opportunity to play with all the high end toys and ask detailed questions on their use was invaluable. Gotta get me a Roland MV8800...In this clip, Just Blaze talks about how he put together Jay-Z's "Show Me What You Got"-

I went to check out the Pharoahe Monch tribute last week at the Galapagos Art Space in Brooklyn (shout out to UNDERGROUND EXP). The house was packed as everyone came out to give props to one of the most creative and poetical emcees. I have a clip here with Monch onstage with O.C. giving the audience a sample of his lyricism-

Supernatural, one of the world's greatest freestylers, hosted the event and did one of his patented routines where he incorporated items from the audience into his freestyle-

Since we are on the topic of Supernat, I thought you would like to check out this performance from 2006 Rock The Bells tour-

Posted by EDAYE at 1:06 AM No comments:
Labels: freestyles, live, monch, pharoahe, supernatural

Oh, Oh, Oh my God! Is it real? Hip Hop on American Idol? During this week's finale, finalist Blake Lewis (known for incorporating beatbox skills into his singing) performed a duet with none other than Doug E. Fresh with Barry B on the turntables. Get, Get, Get Fresh Crew! This was a great moment in the show as the two performed Doug's and Slick Rick's "The Show". Blake Lewis did his thing and showed respect for the original human beat box-DOUG...E... FRESH!

Will Gentrification Spoil the Birthplace of Hip-Hop?

Yesterday the New York Times featured an article on the attempts at proclaiming 1520 Sedgewick Avenue, in the Bronx, New York, a landmark. Why 1520 Sedgewick Avenue you ask? Well it just happens to be the birthplace of Hip Hop culture as delivered through the parties thrown in the buildings recreation hall by DJ Kool Herc beginning in 1973. Throughout NYC the changes within the minority communities have left many without affordable housing and has seen many local institutions shut down or bought out. The fear that it will trickle down towards areas that signify the birthplace of Hip Hop is becoming very viable. Here is a brief rundown direct from the NY TIMES:

"The Sedgwick building is part of the state’s Mitchell-Lama program, in which private landlords who receive tax breaks and subsidized mortgages agree to limit their return on equity and rent to people who meet modest income limits. The contracts allow owners to leave the program and prepay their mortgage loan after 20 years. Rent regulations can protect tenants from increases, but not always...

“It is complicated when you try to preserve some other feature of a building besides its architecture,” said Lisa Kersavage, a preservationist at the Municipal Art Society of New York. “But this is a very important cultural touchstone for New York, and awareness should be raised.”

Cindy Campbell, who promoted the first party where her brother spun the tunes, is intent on doing at least that. She hopes that by highlighting the history of the building, where her family lived for nine years, she might be able to enlist big-name rappers to Mayor Bloomberg in her campaign to help the tenants.

She still recalls the first party — on Aug. 11, 1973, she says — which she dreamed up as a way for her to get some extra money for back-to-school clothes.

“I didn’t want to go to Fordham Road to buy clothes because you’d go to school and see everybody with the same thing on,” she said. “I wanted to go to Delancey Street and get something unusual.”

Her brother wound up giving the neighborhood something unusual, too, inside the packed and sweaty community room. Drawing on his wide-ranging musical tastes, he combined sounds and in time those sounds were combined in new ways as he extended the beats to the delight of the dancers.

“It wasn’t a black thing, it was a we thing,” said Mr. Campbell, now 52. “We played everything. Gary Glitter? We rocked that. We schooled people about music.”