5 YEARS OF THE ZRO HOUR: NEW SHOW- RETURN TO ZERO 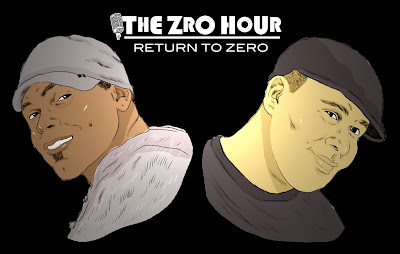 WOW..to think that five years have passed so soon. SO much has been accomplished. SO much has been sacrificed. Many tough times. Internal conflict. New life, New friends. Strong Allies. If you are a follower/fan/listener of THE ZRO HOUR, you know that we have been talking about this great show (for longer than a minute!!) that is being released today. Shout out to MEL STRINGER for her beautiful hand in the portrait of myself and partner in crime, ALEXIE F., above. Wait till you see the CD..more on that later..

THE ZRO HOUR: RETURN TO ZERO is a show celebrating the return to creative, independent and cutting edge hip hop. RETURN TO ZERO takes you back with two of hip hop's most influential architects-emcee/producer MILK DEE (Audio Two) and founder of BOUNCE magazine, DJ, and mixshow legend BOBBITO GARCIA (Stretch Armstrong & Bobbito) as they speak on their journey and contributions to hip hop and current projects. We have a great interview with two reps of the all-female ANOMOLIES CREW- PRI THE HONEY DARK & BIG TARA. Pri discusses her love for emceeing and establishing herself as a producer. The MISNOMERS (sisters Knewdles and Sos, beatboxer Chesney snow) drop in and rock a live joint with Sos on violin. The finale of the show features a special return visit from our first ever guest, soul /funk singer NUCOMME and an incredible freestyle session with Eturnal, ZEPS, Eternia, Mike Swift, Hasan Salaam, Kid Novice Randy Mason, J-Hon, Puerto Glok, Chesney Snow, Knewdles and MONSTER. These previously unreleased interviews and performances were recorded in the last half of 2008. It was an incredible session with no egos and all came together in the spirit of hip hop. The show is laced with great music from CYMARSHALL LAW & KRS ONE, BUFF 1, SAFARI, LADY DAISEY, JASIRI X, AAROPHAT, LIN QUE and SINSAY. VIDEO is coming Friday, March 27th and will be featured on a new site just for this release (details on that soon) as well as a limited edition promo CD, RESPECT THE ARCHITECTS VOL.1 due early April.

Real talk time- we need investors...We have worked hard with limited resources and have stayed consistent with a professional product. We have served as a voice and an outlet for the artists that are bringing world class talent but get overlooked by the mainstream. THE ZRO HOUR started out of love for the music and culture and wanting to see it move forward. Five years later we are still on our mission and have a great body of work to show for it. To everyone who enjoys our work, please pass it on. Tell your friends, family and co-workers. If they love hip hop and want to hear something refreshing and that takes them back to the golden era of hip hop..look no further. Many thanks to Danial from Galaxy Plus Radio for opening my mind to the idea of independent radio and to Alexie F. & DJ AMbush, I am proud to have you as brothers and for allowing the vision to manifest. To all the artists who have passed through our show, thank you for gracing the show with your skills and supporting us, supporting you. 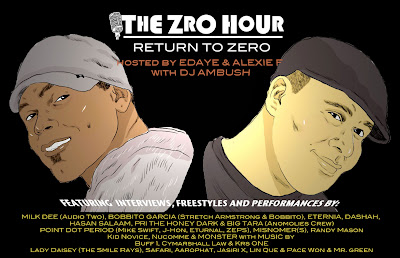 THE ZRO HOUR: RETURN TO ZERO

Thanks to iHIPHOP for the video
Posted by EDAYE at 9:43 AM No comments:
Labels: ihiphop, lil fame, statik selektah, termanology, video
Newer Posts Older Posts Home
Subscribe to: Posts (Atom)