This just in from DAVEY D:

I'm not sure if all these new laws governing digital media (not just Internet Radio) means anything to folks. While we been debating Russell and Imus and all this is the real end game being played by those in power. As I noted in previous posts, they increased the Royalty fees by over 1200 (yes Twelve hundred percent). The rates are applied retroactively. This was a slick way for those who wish to shut down our ability to communicate to take away equal access (net neutrality). Again while many will find this boring and not as sexy as the Russell Imus debate, YOU WILL IF YOU DON'T ALREADY WILL NEED DIGITAL PLATFORMS to disseminate music and information. This includes podcasts, Internet Radio, Cell Phones and all the merging new ways that have served as an alternative to corporate radio.

The US Copyright Office along with the Music Industry and Corporate Radio lobbied and got these new rates passed which resulted in a royalty fee hike like this:. Soma FM Radio in San Francisco paid 5-10Gs annually. There rates went up to 600 thousand dollars and was due in full on May 15th. The Big radio giants cut separate deals with the RIAA (Sound Exchange) so they do not have to pay these fees.

As usual these guys have claimed they are doing this on behalf of the artists, but check people's contracts and see how much is really going back to the artists. Sadly there were some groups within the media reform movements that jumped in bed with the RIAA and basically sold us out for personal gain. They have put out this spin that they ARE REACHING OUT TO INTERNET BROADCASTERS.. That's a lie.. This my friends is the new Payola..

What has happened is that outlets like Clear Channel have already started unfolding their own Internet and HD radio stations to take the place of the smalltime Indy broadcasters that are being forced to close down and file for bankruptcy. If you listen you will hear many radio jocks feverishly pumping up their station websites. They have already cut a big deal with Google to do Internet radio ads

For those who don't think this applies to you.. trust me it absolutely does and will. Time and time again people have been pumping up the Internet as this viable alternative. Well these Music cats had all but gutted that with the new rate hike.. The Bill being proposed below is designed to overturn the ruling. Please take some time to read and do whatever you can to support this Bill.


The Internet Radio Equality Act (.pdf) has just been introduced (in
mid-afternoon) by Representative Jay Inslee and eight cosponsors, with
more cosponsors on the bill expected shortly.

- Nullifies the recent decision of the CRB judges

- Changes the royalty rate-setting standard that applies to Internet
radio royalty arbitrations in the future so that it is the same standard
that applies to satellite radio royalty arbitrations -- the 801(b)(1)
standard that balances the needs of copyright owners, copyright users,
and the public (rather than "willing buyer / willing seller"). (For more
detail on this point, read the recent RAIN issue on "Copyright law,"
here.)

- Instructs future CRBs that the minimum annual royalty per service may
be set no higher than $500. Establishes a "transitional" royalty rate,
until the 2011-15 CRB hearing is held, of either .33 cents per listener
hour, or 7.5% of annual revenues, as selected by the provider for that
year. Those rates would be applied retroactively to January 1, 2006.
(The logic behind this rate, incidentally, is an attempt to match the
royalty rate that satellite radio pays for this royalty -- thus the name
of the bill.)

- Expands the Copyright Act's Section 118 musical work license for
noncommercial webcasters to enable noncomms to also perform sound
recordings over Internet radio at royalty rates designed for
noncommercial entities, and sets an transition royalty at 150% of the
royalty amount paid by each webcaster in 2004 for their "musical works"
royalty (i.e., to ASCAP, BMI, and SESAC).

What can you do?

Now that the bill has been introduced, the www.SaveNetRadio.org "call to
action" is specific and direct: The site is now asking listeners to call
their Representative and ask him/her to "cosponsor the Internet Radio
Equality Act, introduced by Representative Jay Inslee."

Once listeners click the "Call Your Representatives" button on the site
and enter their zip code, they are given their Representative's House
office phone number and a list of "talking points" to emphasize.
Posted by EDAYE at 11:06 AM No comments:

I am feeling this video and song like crazy due to the accurate representation of that Brooklyn, NY street life. I am a Brooklyn native for sure. Shout out to Breevort, Kingsboro, Brownsville, Flatbush, Fort Green and East New York! Joell Ortiz is a beast on the mic and his upcoming work with Dr. Dre is gonna be sick!
Posted by EDAYE at 3:32 PM No comments: 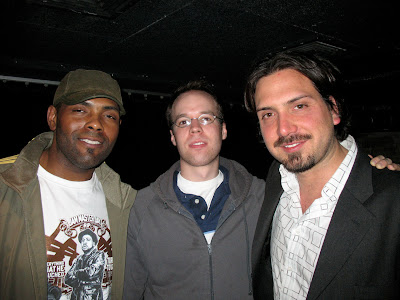 @ Crash Mansion on Monday 04.23.07 to celebrate my friend and mentor Kevin Myers' birthday. Kevin (pictured, right) is the CEO of HEAVYTONE RECORDS. Kevin and I met while I was interning at Wyclef's studio Platinum Sound where he was one of the lead engineers. In the middle is Dan Woodward another friend who is a great graphic illustrator. Check his site for examples of his work..
Posted by EDAYE at 2:34 PM No comments:

I missed this one too..

By Alexis Jeffries
The Hip-Hop Summit Action Network, headed by Russell Simmons and Dr. Benjamin Chavis, issued a statement today (Apr. 23) calling for the recording industry's removal of the words "b**ch," "ho" and "n***er" in all of its future recordings.

"We recommend that the recording and broadcast industries voluntarily remove/bleep/delete the misogynistic words 'bitch' and 'ho' and the racially offensive word 'n***er.'," Simmons and Chavis said in a joint statement.

The statement requests that the three words should be considered with the same objections to obscenity as "extreme curse words."

Simmons and Chavis said "the words are reminders of the misogyny that "African American women have experienced in the United States as part of the history of oppression, inequality, and suffering of women."

"The word 'n***er' is a racially derogatory term that disrespects the pain, suffering, history of racial oppression, and multiple forms of racism against African Americans and other people of color," the statement read.

HSAN is also calling for the formation of a new body called the Coalition on Broadcast Standards, which will consist of leading executives from music, radio and television industries.

The Coalition, the statement says, would be responsible for recommending guidelines for lyrical and visual standards within the recording and media industries.

Additionally, HSAN is calling for the creation of an artist mentoring program and forum to be established, designed to promote dialogue between fans and artists in order to work for positive change in the Hip-Hop industry.

"Hip-Hop is a worldwide cultural phenomena that transcends race and doesn't engage in racial slurs. Don Imus' racially-motivated diatribe toward the Rutger's women's basketball team was in no way connected to Hip-Hop culture. As Chairman and President of the Hip-Hop Summit Action Network (HSAN), respectively, we are concerned by the false comparisons some in the media are making between Don Imus and Hip-Hop. We want to clarify what we feel very strongly is an obvious difference between the two."

The organization was created to harness Hip-Hop music for the purposes of educational advocacy and youth empowerment.
Posted by EDAYE at 1:50 PM No comments:

Jesse Jackson Criticized for Prior Support of Slick Rick

Callin' a spade a spade, huh?

Things are getting out of control since the condemnation of Don Imus over his racially insensitive "joke" towards the Rutgers women's basketball team. Organizations and corporations are reexamining past/current relationships between themselves and Hip Hop artists and one of the people responsible for Imus' ouster-Jesse Jackson. Check it-

Politician/activist Rev. Jesse Jackson has been targeted by the National Legal and Police Center (NLPC), a watch dog group based in Falls Church, Virginia.

Peter Flaherty, president of the National Legal and Policy Center (NLPC), is supporting a shareholder proposal, which is asking corporate giant General Electric to disclose its charitable giving.

Flaherty and the NLPC seek to know how much money has been donated to Jackson and The Rainbow/Push Coalition.

He claims that in the wake of the Imus controversy, Jackson has changed his stance on Hip-Hop music.

"Maybe it's Jackson who is changing his tune," Flaherty said in a statement. "In 2002, the National Legal and Policy Center asked Jackson to disinvite from his Wall Street conference a performer known as Slick Rick whose songs are characterized by vulgar and offensive lyrics. We even pointed to a song titled 'Treat Her Like a Prostitute.'"

Flaherty said that Slick Rick was allowed to speak and perform and Jackson refused to condemn Slick Rick during a press conference.

"GE is one of the biggest financial supporters of Jesse Jackson and his organizations," Flaherty continued. "Let's consider just what GE is subsidizing."

The NLPC, which was founded in 1991 organization that promotes ethics in public life. The group has targeted Hillary Clinton, Al Sharpton, Sen. Maria Cantwell, Nancy Pelosi and others.

The organization has targeted Jackson's business relationships with Verizon, Wal-Mart, NASCAR and others.
Posted by EDAYE at 12:14 PM No comments:
Newer Posts Older Posts Home
Subscribe to: Posts (Atom)