Afro-Punk Festival 2010 in NYC This Weekend! 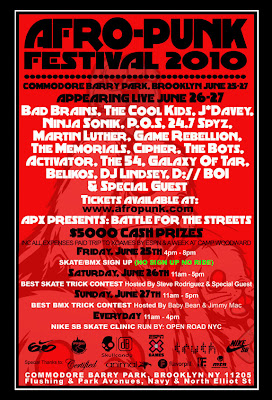 "Definition-defying artists like Santogold, Janelle Monae and TV on the Radio are finding peers and a fanbase under the movement's welcoming umbrella." - MTV News (view clip here!)

Fresh off its first national tour, Afro-punk is returning to Brooklyn for the 6th Annual Afro-punk Festival on June 26-27 in Fort Greene's Commodore Barry Park. And this year, the festival is proud to host hardcore legends and Afro-punk godfathers Bad Brains. In addition to Bad Brains' set, the festival will include performances from Ninjasonik, KOS, God Forbid, Activator, Game Rebellion, P.O.S., and many more! In addition, this year's Afro-punk will feature the Battle For the Streets Skate and BMX contests. The Best Trick Competition (Skate) will take place on Saturday June 26, from 11 a.m. to 4 p.m. and will be hosted by Steve Rodriguez & Keith White. The following day, Sunday June 27, The Best Trick Competition (BMX) will be hosted by Danny Parks aka Baby Bean, Jimmy Mac & Keith White. Both contests will be open to the public, and the contest winners will receive cash prizes, including an All Expenses Paid Trip to the XGames, courtesy of ESPN. The festival will also feature a BMX demo by NYC's Bulldogs Bikes Team, Battle For The Streets Art, NIKE ID Customization, and more. Tickets for the festival are $20 and available at http://www.afropunk.com. After the Brooklyn shows, the festival will hit Chicago and Atlanta.