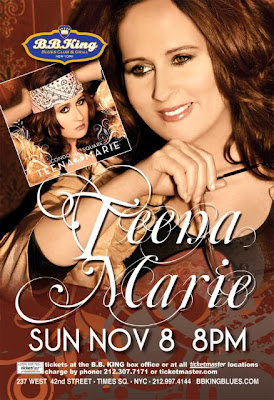 2009 marks the 30th Anniversary of Teena Marie’s recording career with the June release of her thirteenth CD, Congo Square – and there’s a milestone for every decade that has led to it. First is the 16-song CD itself, boasting all of the panoramic musicality a fan could desire. Second is her fresh alignment with Stax Records that –after her storied Motown debut in 1979 – marks the second time Teena has been proudly affiliated with a bedrock black music institution. Finally, there’s a more personal revelation regarding her family lineage that once and for all proves why she has been bursting with indisputable soul all these years. Teena has New Orleans roots!
Posted by EDAYE at 2:24 PM
Labels: teen marie