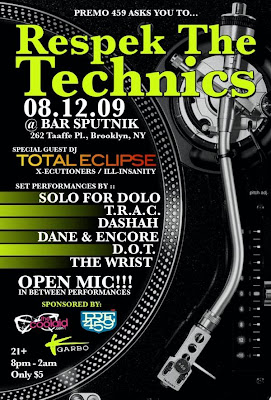 Dashah and DJ Pause has formed a group called FRESH VETZ.They've spent the entire summer recording their new album that's due out later this year. come see them live @ Sputnik in Brooklyn along with Solo For Dolo (who also just dropped an album), DJ Total Eclipse and more. It's going to be a great show, Dashah will be dropping joints from the critically acclaimed opus RB2.5 as well as some spanking new FRESH VET material. Also Hand To Hand Entertainment artist HOP and Blue Legacy will be in the building.