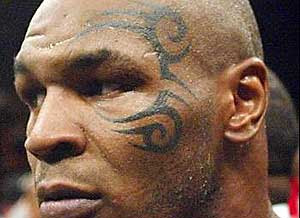 This was widely reported across the news services and it has resulted in a great tragedy for former heavyweight champion, Mike Tyson. Mike Tyson is experiencing a resurgence in popularity and visibility due to the recent release of his critically acclaimed documentary titled "TYSON" and his upcoming appearance in a new comedy, "The Hangover". Exodus Tyson was only 4 years old and her life was cut short in an accident stemming from Exodus' asphyxiation by a treadmill's cables. Our prayers are with you Mike and with your family.

Read the report from YAHOO.
Posted by EDAYE at 11:47 PM
Labels: mike tyson