MOVIES: MADE IN QUEENS 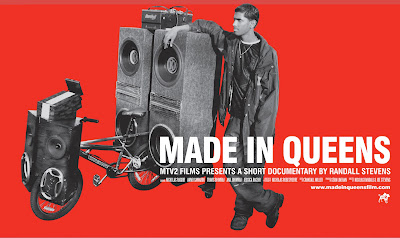 Great new short film about the clash of BMX bike culture mixed with the caribbean culture of building sound systems, MADE IN QUEENS follows a group of Queens, NY youths as they showcase their "stereobikes". These imaginative tinkerers from Trinidad were working late into the nights creating something nobody had ever seen before: enormous stereo systems jury rigged onto ordinary bmx bikes. Traveling together, each behind the handlebars of his or her own massive homemade creation, they treat the neighborhood to an outrageous impromptu music and dance party on wheels. The film, directed by NICOLAS RANDALL & JOE STEVENS is screening at The Queens Museum of Art as a part of the Queens International 4 exhibition January 24th through April 26th. Check the site for the trailer: