MOVIES: CRIPS AND BLOODS: MADE IN AMERICA 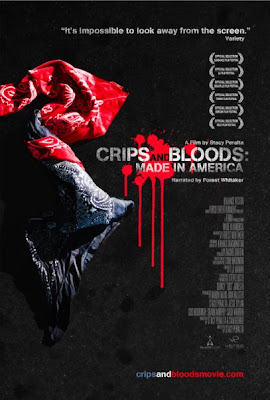 Combining unprecedented access into the worlds of active gangs, CRIPS AND BLOODS: MADE IN AMERICA chronicles the four decade long fued between America's most notorious African-American gangs. Directed by Stacy Peralta ("Dogtown and Z-Boys" and "Riding Giants") and narrated by Forrest Whitaker, the film traces the history of the two gangs' rise and development from inception to present. The film is currently on a limited release tour before its upcoming DVD release. If you are in the New York City area, Crips and Bloods: Made In America is currently playing at the IFC Center from 1/23-1/29. It will also be playing in Los Angeles February 6th to 12th at Laemmle's Sunset 5.