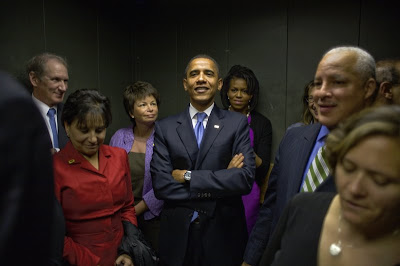 DREA continues the Obama love and appreciation. I think we will all continue to celebrate through the inauguration..

We did it! As I said many times before if you whisper no one will hear you but if you shout, everyone will hear you and man did we holler! To be a part of a historic event is overwhelming. I became so consumed with the whole campaign and for the results to be as they are made it all worth it. To have Senator Barack Obama become President Barack Obama in January is a beautiful thing. He IS the American Dream. All stereotypes has been broken along with the shackles that we have become so accustomed to wearing. The revolution has begun! Here we have a man where the odds were stacked against him. A name that wasn't typical. Growing up in a poor neighborhood, being raised by his grandmother, his father wasn't around for the majority of his life. Living here, there, & everywhere, and possibly being told that he will never make anything out of his life, Barack took that negative and instead of allowing it to bring him down, he used it as fuel to get him to where he is today. He has proven that there is no excuse not to live your life in a positive manner and to strive for what you want. That there is a light at the end of the tunnel. As I've said on many occasions, just because I was raised in the projects doesn't mean I have to live the project lifestyle.

Now I don't know if it was because the lack of sleep started setting in but for a few minutes I heard the chains of oppression begin to break. The song "We Shall Overcome" turned into "We Have Overcome". After many many years, November 4, 2008 turned into the day that African/Black Americans can truly feel a sense of pride. We all will walk with our heads held a little higher, our stride more apparent, and our confidence much stronger. The air is a lot more crisp, the vision more clear, and the victory is oh so sweet. No longer do we have the stigma of being an unwanted visitor in a country our ancestors built. For the first time we have to be respected as a true American. Don't think the struggle is over yet. The real fight begins on January 20, 2009. Now that we helped to get him there, let us help him bring get America back on her feet. It won't be an easy task but it can be done.
Posted by EDAYE at 1:00 AM
Labels: barack obama