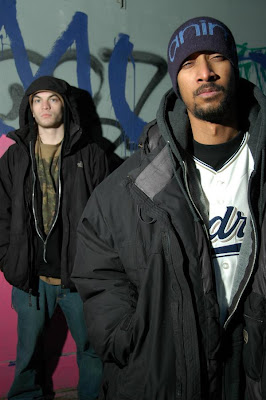 This week's spotlight artist is a dynamic duo in the tradition of the classic hip hop combo of (1) DJ and (1) Emcee- PACE WON & MR. GREEN. In the essence of ‘Eric B. and Rakim’ and ‘Gangstarr.’ they define their style as classical hardcore Hip Hop. Mr. Green’s heart pounding beats blend perfectly with Pace’s gravelly yet smooth flow creating a flawless result. Within days of dropping their first single, they were already in the radio rotation of many profound DJ’s such as DJ Premier, DJ Eclipse and DJ Tony Touch. Their song ’Children Sing’ is considered to be an underground classic. With a dynamic live show that involves includes both improvisation as well as crowd participation they are true performers. The debut album THE ONLY COLOR THAT MATTERS IS GREEN will drop this Spring. Pace Won should not be unfamiliar to fans of Hip Hop. Pace Won is a member of one of New Jersey's illest crews THE OUTSIDAZ and made his debut on The Fugees classic, THE SCORE. He followed his debut with appearances on Rah Digga's DIRTY HARRIET and Redman's MALPRACTICE albums along with a couple of independent releases WON and TELEPATHY. Mr. Green is a self-taught, hip hop composer who has a straight forward approach to his production. Originally a DJ, Mr. Green's first official production credit came at the end of 2006 on C Rayz Walz album "The Dropping". The song "Childhood" featured Matisyahu, the platinum Jewish Reggae sensation and Kosha Dillz. Mr. Green has also produced for our first SPOTLIGHT featured artist CYMARSHALL LAW. Check 'em out and let them know what you think!
Posted by EDAYE at 4:32 PM
Labels: mr. green, pace won, spotlight

I`ve always liked Pace, even though I haven`t heard a whole lot of his music...