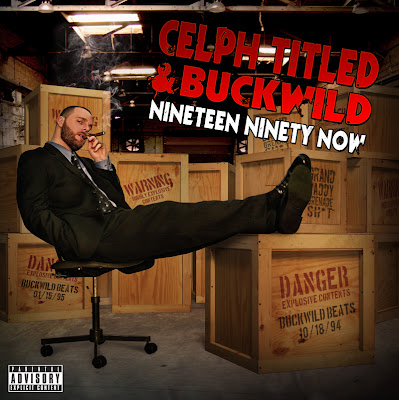 I have only been familiar with Celph Titled's name more than his lyrical and production contributions to hip hop. After listening to this new album, it made me seek out Celph's body of work. Celph Titled combined forces with D.I.T.C. founder Buckwild to create an album both dedicated and influenced by the 90's era of hip hop that is also known as the Golden Era. Built off of Buckwild's unreleased production from 1994-1995, "Nineteen Ninety Now" is one of the best albums that I have enjoyed this year. Last year Marco Polo & Torae delivered a surprise uplift to boom bap hip hop with "Double Barrel" and in 2010, Celph and Buckwild continue to put heads on notice that classical hip hop is not dead.

I dropped one of the advance singles featuring long time collaborator Apathy and Chino XL, "Styles Aint Raw" on THEZROHOUR podcast S06E18. I always keep that track on rewind and thought to myself that it had a 90's vibe to the production. Little did I know that it was from this project. Celph and Buckwild captured the era in a brilliant way. The beats bang out 90's flavor but the rhymes are far from dated. Press play and you will dig in from start to finish with battle rhymes and vivid storytelling. The skits are funny, well done and lend to the overall atmosphere of the album. Scratches performed by Mista Sinista (X-Men, X-ecutioners) embellish an already strong product. Stand out songs include "I Could Write A Rhyme", "Eraserheads" feat. Vinnie Paz, "Miss Those Days", "Out To Lunch" feat. Treach (Naughty By Nature), "Where I Are" and "There Will Be Blood" feat. Sadat X, Grand Puba, AG, OC & Diamond D.