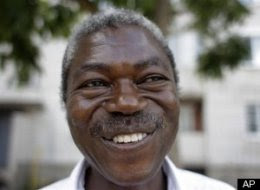 Going outside the world of music for a moment, this news captured my attention and provided further evidence that the world is shifting in ways unseen. Hmmm...The Obama Effect possibly?

People in the town of Novozavidovo, Russia used to stare at Jean Gregoire Sagbo because they had never seen a black man. Now they say they see in him something equally rare – an honest politician. Sagbo last month became the first black to be elected to office in Russia. In a country where racism is entrenched and often violent, Sagbo's election as one of Novozavidovo's 10 municipal councilors is a milestone. But among the town's 10,000 people, the 48-year-old from the West African country of Benin is viewed simply a Russian who cares about his hometown.

He promises to revive the impoverished, garbage-strewn town where he has lived for 21 years and raised a family. His plans include reducing rampant drug addiction, cleaning up a polluted lake and delivering heating to homes. "Novozavidovo is dying," Sagbo said in an interview in the ramshackle municipal building. "This is my home, my town. We can't live like this."

"His skin is black but he is Russian inside," said Vyacheslav Arakelov, the mayor. "The way he cares about this place, only a Russian can care." Sagbo isn't the first black in Russian politics. Another West African, Joaquin Crima of Guinea-Bissau, ran for head of a southern Russian district a year ago but was heavily defeated. Crima was dubbed by the media "Russia's Obama." Now they've shifted the title to Sagbo, much to his annoyance.

"My name is not Obama. It's sensationalism," he said. "He is black and I am black, but it's a totally different situation."

Read more at the original post on the HUFFINGTONPOST.COM
Posted by EDAYE at 11:14 AM
Labels: Jean Gregoire Sagbo, russia