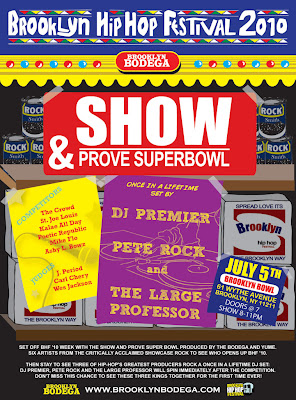 Brooklyn Bodega, producers of the 6th Annual Brooklyn Hip-Hop Festival (BHF) announced today that legendary producers DJ Premier and Pete Rock will be joining The Large Professor for a special DJ set at BHF '10 Show and Prove Super Bowl. The event will be held at Brooklyn Bowl, 61 Wythe Avenue on Monday, July 5th.
Description: Previously only done in Japan, for the first time ever, fans in the United States have the opportunity to see three of the greatest producers in Hip-Hop rocking the same stage. Brooklyn Bodega and YUME Music have partnered up to showcase this "Unforgettable Set" as the headlining act of its Show & Prove Superbowl where six aspiring Hip-Hop artists compete for two slots that open the stage at the Main Day of the Festival, Saturday, July 10th.

Kalae All Day is a definite favorite and of course I am also rooting for Randy Mason and his group THE CROWD. Both have been featured here on this site and podcast.

PURCHASE TICKETS HERE IT'S ONLY $5 bucks!!!