WHO CAN ROAST THE MOST 12? Major B-Boy/B-Girl Battle returns to NYC 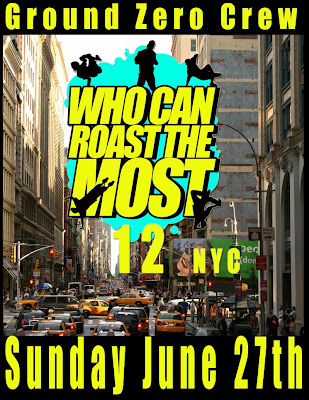 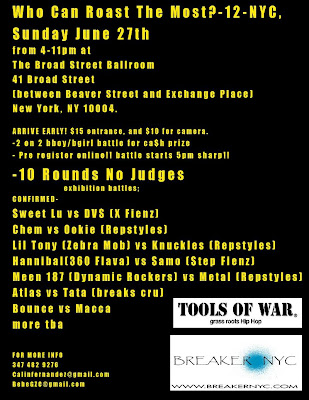 Since 1999, Who Can Roast The Most? has grown to be recognized as a premier B-Boy/B-Girl battle, acclaimed as a "MUST" by dancers and enthusiasts in Miami and beyond. The event has been traditionally produced by Ground Zero Crew, the Miami-based, world renowned B-Boy crew. The event has been held for over a decade in multiple venues including South Florida, Los Angeles, Washington DC, and Sunday, June 27th returns to New York City for its 12th installation.

The event derives its name from the terminology used when a dancer or crew are out-done in a battle, or lose in a competitive dance situation: "Oh you got roasted!" Indeed, Who Can Roast the Most? boasts its exceptional popularity among the global B-Boy/B-Girl community, for its unique formula and approach. It has come to be recognized as the ultimate in One-on-One battles, staying clear of the well tread contests that are ubiquitous among the scene, by bringing together a cast of characters drawing from talent pools from opposite geographical locations culminating in an energetic experience of stylistic dynamism. The best B-Boys and B-Girls in the East or South East face off against the best in the West and Mid-West. Participants undergo a grueling 10 rounds of competitive dancing where their talent and stamina are tested to their limit. All in ALL, the event promotes excellence in performance, without seeking to declare one of the sides Victorious! That's Right! There is NO Winner announced to add to the hype, and the event features NO JUDGES. Fans do vote online for who they want to see perform. And what they consider to be dream matches, and "Who Can Roast the Most?" turns them into a reality!

Thanks to TOOLS OF WAR for the heads up!
Posted by EDAYE at 2:56 PM
Labels: b-boy, b-girl, battle, nyc