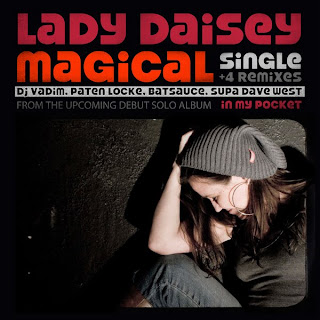 Lady Daisey has rocked venues around the globe - from small smokey clubs to massive hip hop festivals - her message is one of love and inspiration, soulfully presented over head noddin' Batsauce beats. Singing since she was 5, Lady Daisey has developed a playful powerhouse style that's sure to grab the attention and steal the hearts of everyone within ear's reach. It's like sunshine for your soul... This is Daisey & Batsauce's first BBE release and features many special mixes including one from DJ Vadim. Debut album "In My Pocket" due May 7th 2010.
Posted by EDAYE at 11:33 PM
Labels: batsauce, lady daisey, the smile rays