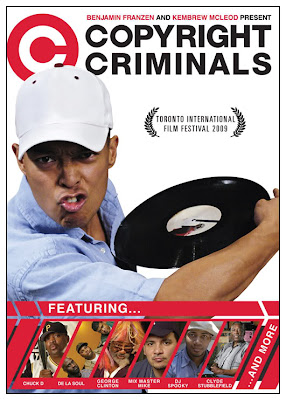 Can you own a sound?

COPYRIGHT CRIMINALS, a documentary produced by Benjamin Franzen and Kembrew McLeod, examines the commercial and creative value of musical sampling, including the ongoing debates about artistic expression, copyright law and money.

COPYRIGHT CRIMINALS showcases many of Hip Hop music's legendary figures like Public Enemy, De La Soul and Digital Underground along with emerging artists such as audiovisual remixers Eclectic Method. The film also provides an in-depth look at artists who have been sampled, such as renowned drummer Clyde Stubblefield, the world's most sampled musician, best known for his work with James Brown, as well as commentary by Funk legend George Clinton.

Thanks to TOOLS OF WAR
Posted by EDAYE at 11:45 AM
Labels: copyright criminals