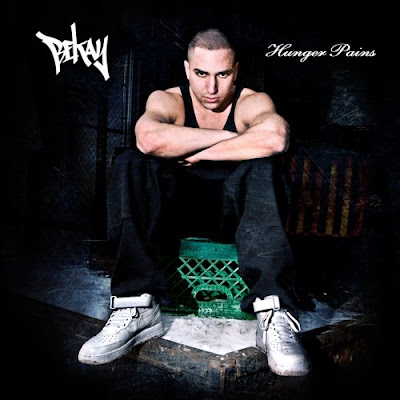 Brooklyn emcee, BEKAY, has appeared on THE ZRO HOUR podcast as a guest and has long been supported on the blog. I previously dropped "Brooklyn Bridge" (feat. Masta Ace) and "I Am" (feat. DJ Revolution) on recent episodes of THE ZRO HOUR podcast. This week, Coalmine Records released his follow up to "The Horror Flick LP"- "HUNGER PAINS". With gritty lyrics and classic boom-bap, the album features production from the likes of Alchemist, Marco Polo, Shuko, Illmind, DJ Babu, BeanOne, Street Orchestra and includes features from R.A. the Rugged Man, Masta Ace, Heltah Skeltah, Wordsworth, Saigon, Dilated Peoples and more. Be on the look out for his current single, "Bloodsport", with the video coming soon. I was in the house for Bekay's album release party last night at Brooklyn's Sputnik and had a chance to celebrate with the big homie. Bekay always brings the same energy that you hear on record to the stage. If you have the stomach for venomous lyrics from the mind of one of BK's illest, go out and satisfy your "HUNGER PAINS"-