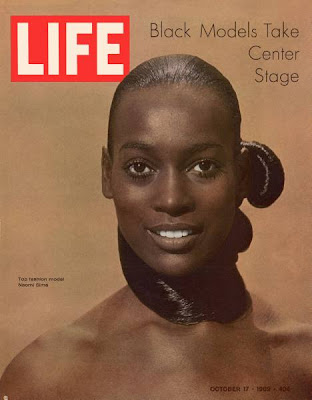 The New York Times reports that model Naomi Sims died on Saturday at age 61. The cause of death was cancer. Sims was considered the "first black supermodel" for appearing on the cover of Ladies Home Journal in November 1968, a time when African-American models were few and far between. She subsequently modeled for designers like Halston, Fernando Sánchez, Teal Traina, and Giorgio di Sant'Angelo. She also appeared on many other magazine covers, and two images-- a 1969 cover of LIFE and a 1967 New York Times fashion magazine over--are on display in the Metropolitan Museum's "The Model As Muse" exhibit.