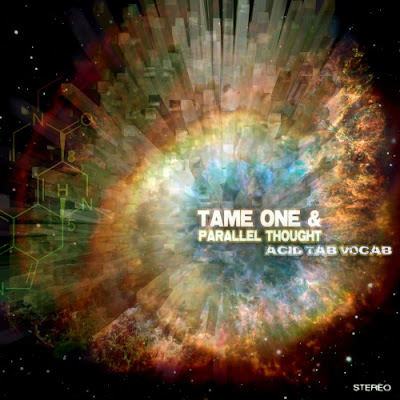 Amalgam Digital presents TAME ONE's new release, ACID TAB VOCAB. Acid Tab Vocab is a conceptual album that invites the listener on a journey through the artist’s many moods by generating an atmosphere that encourages experimentation and open-mindedness. Knowledge of the production-duo Parallel Thought, who produced the album with fellow member Drum, describes the new album, “It doesn’t matter what you’re on, whether it’s acid, weed, anger or happiness, this album takes you through the mood you’re going through, amplifies the feeling and takes you on the ultimate trip.”

The album features guest vocals from fellow underground hip hop mainstays such as Del the Funky Homosapien and fellow Weatherman members, Aesop Rock and Amalgam Digital’s own Breeze Brewin. “Acid Tab Vocab” also sheds light on Tame One’s past and family. The artist opens up about his early years on ‘Suede Adidas,’ and pays homage to relative Redman on the second single, ‘Press Rewind.’


Purchase the CD HERE
Posted by EDAYE at 1:55 AM
Labels: tame one, video