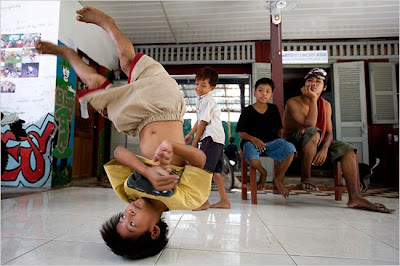 It may be the only place in Cambodia where the children are nicknamed Homey, Frog, Floater, Fresh, Bugs and Diamond. And there are not many places like this small courtyard, thumping with the beat of a boom box, where dozens of boys in big T-shirts are spinning on their heads and doing one-hand hops, elbow tracks, flairs, halos, air tracks and windmills. And, of course, krumping.

It is a little slice of Long Beach, Calif., brought here by a former gang member by way of a federal prison, an immigration jail and then expulsion four years ago from his homeland, the United States, to the homeland of his parents, Cambodia. The former gang member is Tuy Sobil, 30, who goes by the street name K.K. The boys are Cambodian street children he has taken under his wing as he teaches them the art he brought with him, break dancing, as well as his hard lessons in life.