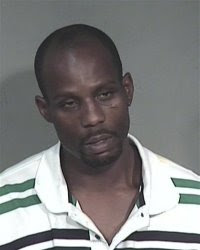 DMX is continuing his spiral downwards and it is very distressing to see one of our greatest hip hop icons in this condition. I have a fear that his excessive arrest record will cause the authorities to spring a boatload of jail time on D. Many of the arrests were for both minor and felonious charges. I know his lawyers love him. We only know his public life and whatever personal turmoil he is going through, we pray that he can overcome...

Rapper DMX was arrested at a Phoenix mall Saturday on suspicion that he gave a gave a false name and Social Security number to a hospital to get out of paying for medical expenses. Maricopa County Sheriff Joe Arpaio said that when DMX, whose real name is Earl Simmons, went to Scottsdale's Mayo Clinic in April, he used the name "Troy Jones" and failed to pay a $7,500 bill.
DMX's Scottsdale attorney, Cameron Morgan, declined to comment. Arpaio said his office began investigating the charge following an animal neglect investigation last year at the 37-year-old rapper's north Phoenix home. DMX was arrested in that case on felony drug possession and misdemeanor animal cruelty charges after authorities seized 12 pit bull dogs and dug up the remains of three others. The musician/actor has had other recent run-ins with the law, including an arrest at Phoenix Sky Harbor International Airport earlier this month on outstanding warrants after he failed to appear in court. The week before, he was arrested in Miami on charges of attempting to purchase cocaine and marijuana. "He's back in jail again," Arpaio said. "I don't know why judges keep letting this guy out. Every time he goes in there, he gets out on bond. "I'm hoping this is the one time he's going to pay the penalty for his offense," he added. Arpaio said the bond had not been set in the recent arrest.
Posted by EDAYE at 12:32 PM
Labels: dmx

lets us pray 4 the man that is not only a great hiphop icon,,,he is also one of the finest rapper/actors of our genaration

i made ya look

yes... we need to pray for this talented man...