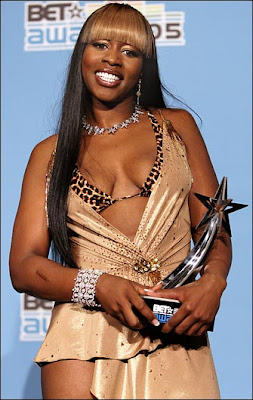 There is no joy in seeing another young, black woman or man being added to the ranks of the incarcerated. I just hope that this tragedy will help give pause to the next person and deter them from making a potentially regretful decision.
Posted by EDAYE at 2:55 AM

I totally agree. The thing I don't understand is this. You have young talented men and women who work so hard to better themselves financially and better their situations but once they receive their big break, that "Hood Mentality" is still there. Some kind of way there needs to be some sort of program that will help teach our young folks to let that part go because as you put it, was $3000 worth "Street Cred"? Did she think people would see her as being soft? I'm sure she went through hell to in order to have her chance at stardom and now she will have to fight even harder not to be "Big Bertha's New Wife".

What a waste...of talent, time & well money. I`m far from rich or well off, but I`m not shooting someone for $3000. There`s other ways of getting it back, especially if you`re 'so hood'. Ya can`t place a price tag on freedom, besides now Remy`s gon` spend much more in legal fees & whatnot so was it really worth it? I`m a BiG Remy Ma fan, but I think what she did was stupid & that`s just the bottom line. So many people would kill to be in Remy`s spot, but she`s tryin` to kill while in that spot....LoL, the world`s gettin` crazier by the day...