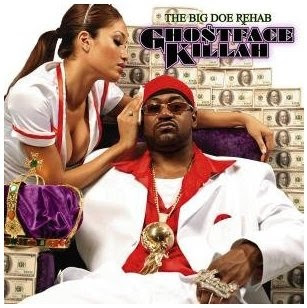 After releasing two stellar CDs in 2006, Ghostface returns on the scene a week before his WU clan drops. On December 4th get ready for the BIG DOE REHAB. Ghost is one of my all time favorites and I have already pre-ordered the CD. Ghostface is one of the most consistent artists in hip hop period. Check his DEF JAM page HERE

In other Tony Starks news, in an interview with MTV, Ghostface speaks on a cameo role that was filmed for Marvel Studios 2008 IRON MAN film:

"I jumped in there for maybe 12 or 16 bars, nothing too major," Ghost downplayed before describing his scene with the film's star. "It was a good look for the kid because Robert Downey Jr. recognized me as soon as I seen him. He was like, 'Yo, Tony!' ... For him to recognize me, I was kinda surprised by that. I didn't know he even knew about the kid. ... We called each other Tony onscreen. I'm like, 'Tony Stark, I got your jet, I didn't mess it up.' He was like, 'I got the Bentley for you, I laced it up.' I had two girls with me, I was like, 'That's you [pointing toward the girls].' I sent two birds at him. It was a wrap for that scene. He's a cool dude and funny. Big up to Robert Downey Jr."
Posted by EDAYE at 1:52 AM