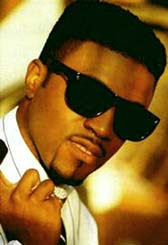 In 2000, Guy fans were treated with not only a reunion but a new release simply titled "Guy III". I thought it was a good album but it was short lived. Teddy found himself going back to Blackstreet in 2003. In 1999, the world lost a man who was an idol of and a huge influence on Teddy. This man had everyone interested in "Computer Love". I am speaking of course about the late Roger Troutman. I remember watching a tribute show to Mr Troutman and saw Teddy speaking about how much he admired him and wanted to work with him. He said when Blackstreet would do a show, he would have an extra set -up just in case he wanted to get on stage with him. This is true. I remember seeing Blackstreet when my boys New Edition did their "Home Again" tour and I saw the extra keyboard but I thought it may have been for back up. Anyway, if I'm wrong then I'll be the first to admit it but I feel like this- Why didn't he just call whoever he needed to call to get to work with this man? Why would Teddy think that his mentor would seek him out? Keith Sweat worked with him on is 1994 release "Get Up On It". The song is called "Put Your Lovin Through The Test"  which is a slow song and it starts off with Roger in his computer voice saying, "Let me go down on you, Baby". Oh Lawd, have mercy on my soul.  He also worked with Johnny Gill on his 1996 release "Let's Get The Mood Right". The single "Girl It's Your Body" deserves an Oh Lawd, have mercy on my soul too. Of course these are two of many who has worked with the late Mr. Troutman. What's Teddy's excuse? I feel that Teddy had a dream and was blessed to be able to follow through with most of it. Somewhere along the line though, ego may have gotten in the way. Not saying that it was all his fault, but he had two groups that didn't last and lost the chance to work with the one man who inspired him to pick up a keyboard (with a long plastic tube) to create a sound that millions love and later copied. Though I'm on the outside looking in, one plus one equals two. Teddy Riley made music that is loved by many and is timeless but he didn't achieve his goal of having a successful group that was long lasting. Again, only my opinion.
Posted by EDAYE at 9:09 PM