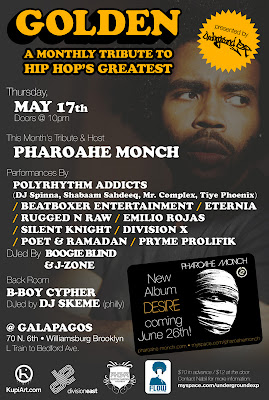 UNDERGROUND EXP presents a tribute to the one and only PHAROAHE MONCH at the GALAPAGOS ART SPACE in Brooklyn, NY. Featured performances include Beatboxer Entertainment, Silent Knight, Rugged N Raw, Division X and Eternia. This is THE show for me. Pharoahe Monch is one of my personal greatest emcees and has been doin' it since the very early 90's. He and Prince Poetry, formerly of Organized Konfusion, were way ahead of their time for their production, rhyme skills and content. Pharoahe is due to release his second solo album titled DESIRE. The show will be bananas indeed! I came through the last "Golden" jump off where Large Professor was saluted. Extra P gave the crowd mad energy and when his set suffered from the pitfalls of "2007 technology", he commanded the DJ to spin some vinyl and freestyled for the rest of his performance. Beatboxer Entertainment were also incredible and both Silent Knight and Division X represented that true Hip Hop that I live for. All were extremely talented and creative with their flows and content. I will be in the house for this one....
Posted by EDAYE at 1:44 AM