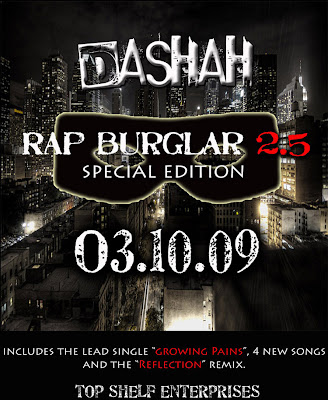 Our peeps DASHAH is set to release a special edition version of his current CD release RAP BURGLAR entitled RAP BURGLAR 2.5 The Return. The first single dropped is titled "Growing Pains". Dashah has set the year off right with this banger. Dashah has the right energy and lyrical content to illustrate his life's journey.

Yeah Dashah brings it back!!! Cop that Rap Burglar 2.5! What´s realer than this!!! The ZRO-Hour only brings you the REAL! Peace to Edaye and Alexie F.!